The CEACR report is issued

The CEACR prepares a report on member States meeting obligations under ratified Conventions and the ILO Constitution.

The CEACR prepares an annual report, which is in the first place submitted to the Governing Body at its March session for transmission to the International Labour Conference in June. The CEACR report is published in February, and is made available in hard copy and in the ILO website. 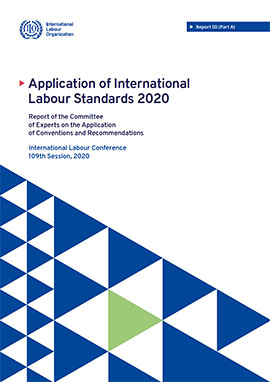 The second volume contains a General Survey (Report III (Part B)) in which the CEACR examines the state of the legislation and practice regarding a given number of Conventions and Recommendations, selected annually by the Governing Body. This examination covers all member States regardless of whether or not they have ratified the given Conventions. General Surveys since 1985 are available in the ILO website.

The comments of the CEACR on the fulfilment by member States of their standards-related obligations that take the form of observations are published in the CEACR report which has, at the beginning, the indexes of comments by Convention and by country. The NORMLEX database includes both observations and direct requests by the CEACR.