Special procedures - Complaints to the CFA

The CFA examines the complaint

The CFA considers the allegations and reaches conclusions and recommendations on the basis of consensus.

The CFA deliberates in private sessions, its working documents are confidential and, in practice, decisions are taken by consensus.

No representative or national of the State against which a complaint has been lodged, or person occupying an official position in the national complainant organization, or a member from the employers’ or workers’ group of the country concerned, may participate in the deliberations or even be present during the hearing of the complaint in question. Similarly, the documents concerning the case are not supplied to them.

Despite there are no formal rules fixing any particular period of prescription in the procedure for examining complaints, the CFA has acknowledged that it may be difficult for a government – if not impossible – to reply in detail to allegations regarding matters which occurred a long time ago. It may in such cases choose not to examine the complaint.

Any request for withdrawal of a complaint must come from the complainant organization concerned. Where a request is made, the CFA evaluates the reasons given to explain the withdrawal. This is done with a view to establishing whether the request has been made in full independence.

Where a request is made for the postponement of examination of a case, either by a complainant or the government, the practice followed by the CFA consists of deciding the question in full freedom when the reasons given for the request have been evaluated and taking into account the circumstances of the case. See the Procedures for the examination of complaints alleging violations of freedom of association for details.

The CFA report of a case is transmitted to the full Governing Body for approval, and ultimately published in the Official Bulletin and on the ILO website. CFA reports on each case have the following structure: allegations made, government’s reply, conclusions and recommendations of the CFA. Since case handling normally continues over several meetings, case reports use a particular terminology to reflect status and results.

Definitive report: The CFA determines that the case calls for no further examination, where no violation of freedom of association is found or where the issues have been resolved or the CFA states a principle or provides guidelines to be followed without requesting the government to keep it informed. The case will then be closed.

Interim report: The government concerned is asked to take specific action or to provide additional information to assist the CFA in examining the case further. The government may also be asked to remedy aspects of the case and report back to the CFA on the measures which have been taken.

The CFA normally re-examines the case when it receives the government and/or complainant’s additional information and will issue an “urgent appeal” if it has not received the information requested from the government after two postponements. After the re-examination, the CFA may make new interim conclusions and recommendations in light of any new information provided and continue to keep the case under full examination.

The table below explains the terminology used for the status of cases before the CFA and that used to classify the CFA reports on a case. 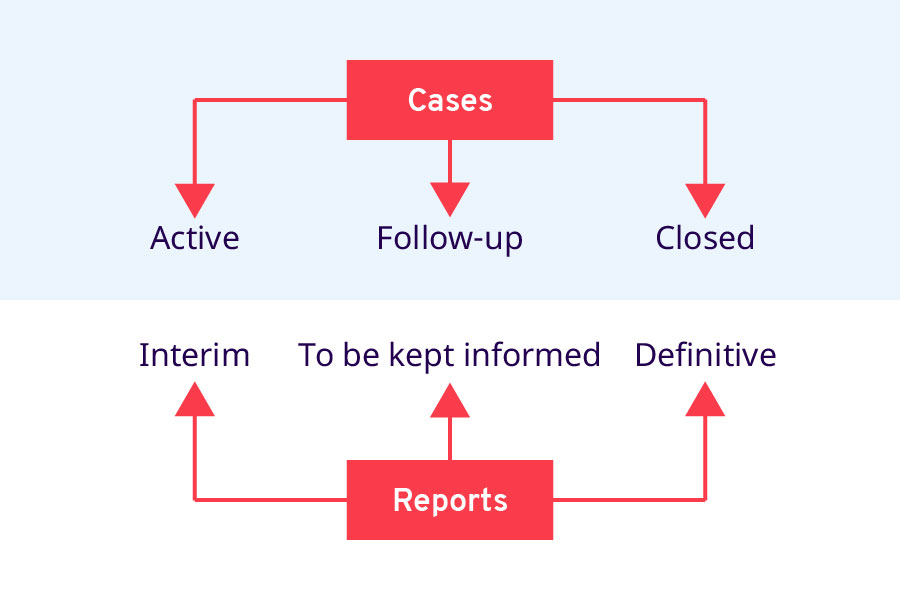 CFA reports can also be found in the NORMLEX database, where cases appear by status in the country profiles.

The CFA has recently decided that any inactive cases, i.e. cases that have not received information from the parties for 18 months (or 18 months from the last examination of the case), will be considered closed. This practice would not be used for serious and urgent cases. The closure of inactive cases concerning countries that have not ratified the Conventions on freedom of association and collective bargaining will be decided on a case-by-case basis depending upon the nature of the case. Cases that are closed in this manner will have the following indication on the ILO website: “In the absence of information from either the complainant or the Government in the last 18 months since the Committee examined this case, this case has been closed.”